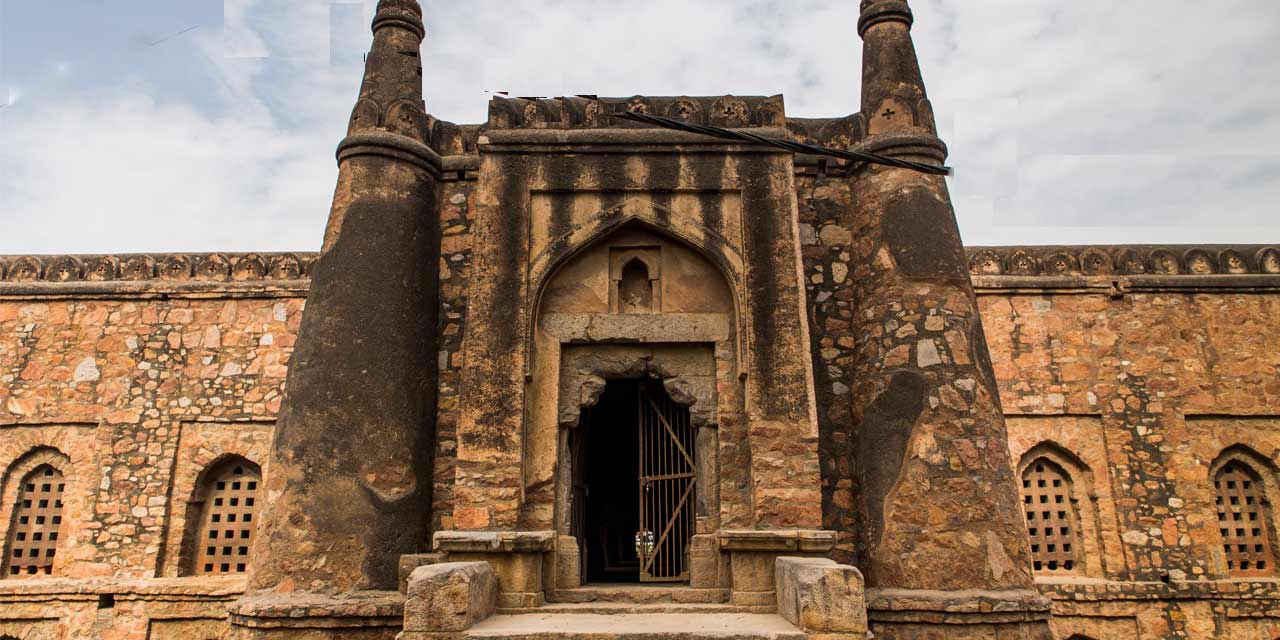 Located in the area of Malviya Nagar, Jahapannah, is the Khirki Mosque or commonly known as Khirki Masjid. Known for its unique architecture and historical significance, this mosque was built by Khan-i-Jahan Junan Shah who was the prime minister of Feroz Shah Tuglaq, during the Tughlaq Dynasty from 1351 to 1388.

The mosque premises contain around 85 domes which add to its beauty and uniqueness. Believed to be the only historical architecture in Northern India which is a blend of both Hindu and Muslim architecture, the Khirki mosque is a perfect amalgamation of the two separated frontiers.

The Architectural Significance of Khirki Mosque

As the name suggests, the mosque adorns a large number of 'khirkis' which is the Urdu word for Windows. The windows are beautifully carved with perforations and add to the beauty of the place. Due to these beautiful windows, the khirki mosque is also called ‘the fort of windows’. The primary purpose of these windows was to provide light and air, as a source of ventilation to the courtyard of the fort.

The khirki mosque is built in a huge area of 87 square meters and stands on an elevated platform 3 meters high. The opening to the mosque is arched, unlike previous architectures under the ruling dynasty, which adds similarity to an Islamic monument. One unique attribute of the khirki mosque is that it is square-shaped, unlike most other circular mosques. The whole area is divided into two parts with separate courtyards.

The khirki mosque holds a strong historical significance. The mosque was built by Khan-i-Jahan Junan Shah who was a Hindu by birth but converted to Muslim under Feroz shah Tughlaq’s rule. His name is also inscribed on the eastern gate as ‘khan-e-Jahan Junan Shah’ which serves as an evidence of their presence under the absence of literary evidence.

Feroz Shah Tughlaq was known for building different monuments and the khirki mosque was ordered to be built as a symbol of ‘pious inaugural contribution towards the sultanate capital’.

Although the mosque strong historical significance and enjoys a large follower base, the access to this place is a bit tricky. The mosque can be accessed through the narrow streets of khirki village near Saket area of South Delhi. It lies close to the press Enclave Marg near CityWalk Mall in Saket.

The boundaries of the Jahapanah area also behold the Satpula structure which times back to the Tughlaq dynasty and is a juncture of seven bridges and two bays at a higher level.

A lot of visitors come to see and get mesmerized at the stunning beauty of the khirki mosque throughout the year, listing it highly under the Delhi Tourism.

How to Reach Khirki Mosque

Khirki mosque is located in the Jahapanah area of Malviya Nagar, Saket, South Delhi. The best way to reach here is through a metro with Malviya Nagar metro station being the nearest one, just 1.5 km away.

If you are traveling by air, Indira Gandhi International Airport is the nearest one 12.1 km away. You can hire a private taxi from the airport to reach Malviya Nagar. Another hassle-free option for travelling within Delhi is the rental service by top car rental companies.

We at Delhi Tourism strive to ensure a terrific experience to our customers while exploring the various popular sightseeing places of Delhi. Customers can plan their visit to Delhi with our all-inclusive Delhi tour packages designed keeping in mind the budget and time constraint of the visitors. Please fill the Contact Us form to reach us.