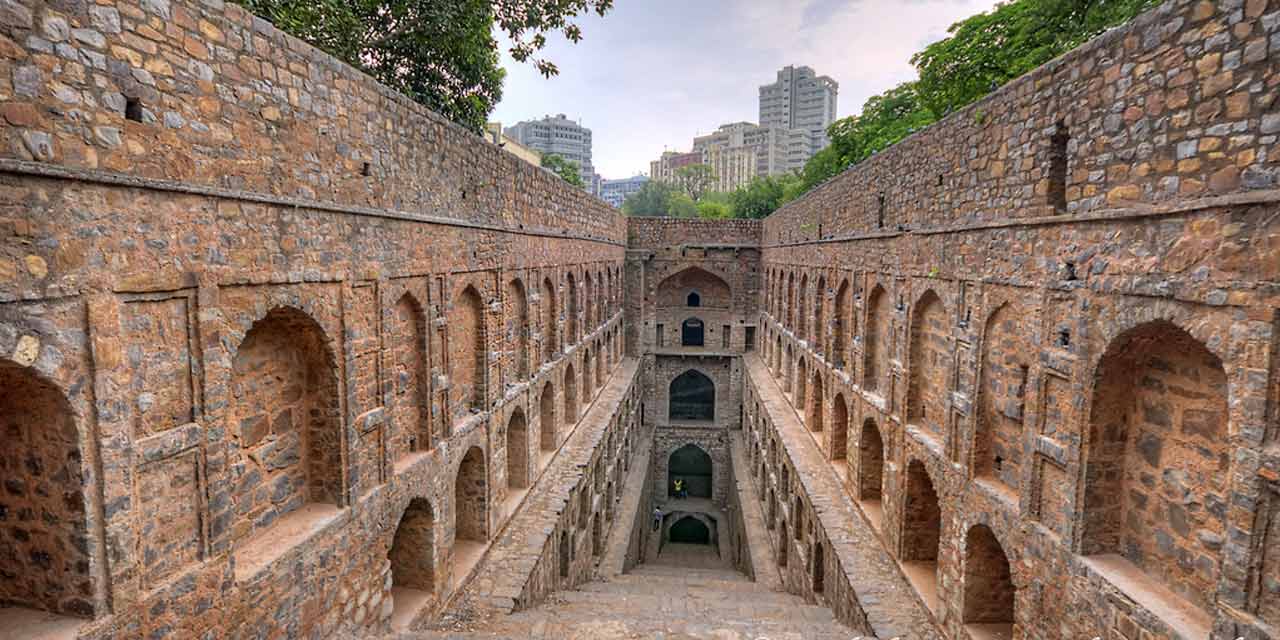 Agrasen Ki Baoli is the oldest monument of central Delhi and is, by far, one of the most preserved Baolis of the city. It is located near Connaught Place, close to the Hailey Road, in Hailey Lane. It is also very close to other important sites of Delhi including the India Gate and the Jantar Mantar.

Agrasen Ki Baoli is one of the most important baolis of Delhi. Also known as Agrasen Ki Baodi, the historical monument is being protected by the Archaeological Survey of India under the Ancient Monuments and Archaeological Sites and Remains Act of 1958. The baoli is 15-meter wide and 60-meter long.

There is no mention in the history as to who made the baoli; however, it is believed to have been built by King Agrasen. It is said that it was rebuilt in the 14th century by the Agaral community. The baoli now serves as a place of historical importance, a hang-out spot for family picnics and a destination for lovers in Delhi.

The word Baoli refers to a step well. Also known as Baodi or Bawdi, this kind of structure can frequently be found in the states of Rajasthan and Gujarat. Temple step wells and water temples were quite popular in ancient India. The step wells and reservoirs in places like Dholavira give a fair sense of the architectural patterns followed in the Indus Valley Civilisation.

The architecture of Agrasen Ki Baoli is a rather interesting one and is one of its kind in Delhi. It has 108 steps that lead to the step well. The step well in Agrasen Ki Baoli is divided into three levels. All of these levels are lined with arched niches on both sides. These arches served as a meeting place and provided relief from the heat during summers. There are also passages to the rooms constructed in the baoli. However, the rooms are now locked for security reasons.

Although it is a much older structure, from the architectural point of view, it appears that this step well has been rebuilt during the Tughlaq tenure. One can say that on the basis of architectural nuances of the place, which are different from that of Anangtal Baoli, which is the oldest Baoli of Delhi, located in Mehrauli. Anangtal Baoli was built in 10th century by Anang Pal II, the Rajput king from the Tomar dynasty. Anang Tal derives its name after the king’s name, thereby meaning the reservoir provided by King Anang Pal.

Although there is not much clarity on how Agrasen Ki Baoli has got its name, there’s another story to it too. It is believed that it is named after the Agrawal community. In 1132 CE, there was an Agrawal poet named Vibudh Shridhar. In one of his works called Pasanahacariu, he mentioned an influential Agrawal merchant called Nattal Sahu. Sahu was also one of the ministers to the court of Anang Pal III. It is believed that rebuilding of the Agrasen Ki Baoli within the means of the very affluent Agrawal community during the 14th century.

The baoli is built by putting together the uneven stones, termed as rubble masonry. There is also a small mosque in Agrasen Ki Baoli, towards the western corner of the monument. Although it is in a dilapidated state, with a corner of its fallen roof, but is still a place worth a visit.

The mosque comprises of four pillars made up of Red sandstone, which support the roof. This structure of the mosque is very unlike the usual structures of mosques that we see around. Interestingly, the columns are carved with Buddhist-chaitya motifs. The space between the rectangular enclosure and the arch is decorated with stucco medallions, making it an architecture worth a look.

Agrasen Ki Baoli has a fascinating connection with the Bollywood. Don’t be surprised if you see a Bollywood star shooting his next motion picture in the baoli, the next time you visit the place. From Salman Khan to Aamir Khan, a lot of movies have featured the place. In the recent Aamir Khan starrer PK, his character is shown living in Agrasen Ki Baoli.

The baoli is also seen in Salman Khan Anushka Sharma starrer Sultan and late Sridevi’s award-winning thriller Mom. In 2012, a photo shoot of Formula One models was also organized in the baoli.

There are several stories stating that Agrasen Ki Baoli is a haunted place. It is said that the black water of the baoli had invited people to jump in it and commit suicide.

One doesn’t have facts to support if the place is haunted or not, but as a precautionary measure, the baoli is kept dry and waterless now. There are hundreds of bats that have housed themselves in the baoli and one can hear them loud while stepping down in the monument.

Going by the logic of water inviting people to commit suicide, one should know of a number of incidents. But if we scroll through the newspapers, the only incidence that comes to notice is the one that happened in 2007, but the depth of water at that time was just four to five feet. So, one wonders how true are the rumours. Due to these rumours, however, Agrasen Ki Baoli is termed as one of the top most haunted places in the country.

Agrasen ki Baoli timings are from 7 AM to 6 PM. The opening time of Agrasen Ki Baoli is 7 AM and it is advisable to visit it during early morning to avoid the crowd. The closing time of the Baoli is 6 PM. It remains open all days of the week through 365 days.

There is no ticket fee to visit Agrasen Ki Baoli.

Bus: One of the best ways of commuting within Delhi is DTC buses. The network has a vast coverage and is widespread. DTC buses number 894, 743Ext, 442, 957 and 522 ply towards the Agrasen Ki Baoli.

Metro: Barakhamba Road metro station on the blue line is the nearest metro station to Agrasen Ki Baoli. It is a distance of 650m from the baoli and one can easily walk from the station towards Baoli.

Rajiv Chowk (yellow and blue lines) and Janpath metro station on the Violet line are other two stations, at a distance of 2km and 800m respectively, close to the Baoli. After getting down from the metro, one can take a bus, an auto or a cab to reach the place.

Auto/Cab/Taxi: Delhi has an amazingly well-connected network of auto rickshaws, taxis, and cabs. For the ones visiting the city for the first time, these vehicles are a great choice. You can order them via apps like Ola, Uber, and Jugnoo or take them while you are on the road.