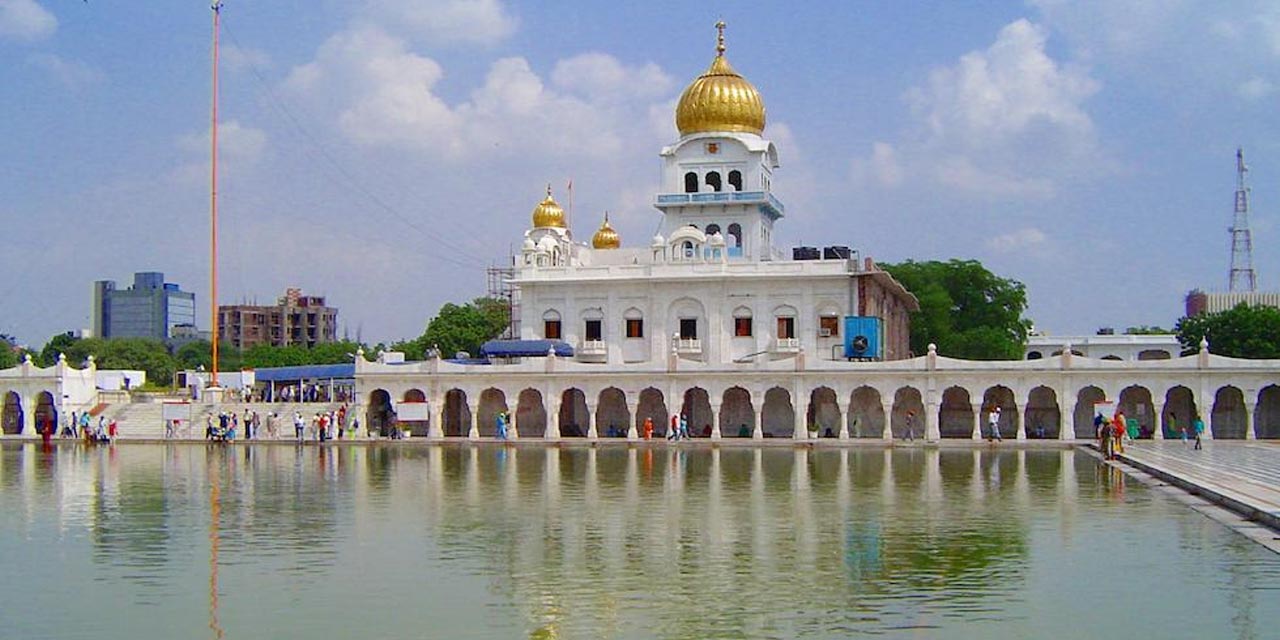 This Sikh chant is heard by many, understood by few but loved and treasured by most. The words, even if not understood completely bring a sense of calm and belongingness to the ears, immediately comforting and bringing a sense of companionship from the universe.

Gurudwara Bangla Sahib is located on Baba Kharak Singh Marg near Connaught Place and it is one of the prominent structures in the capital for architectural and religious significance. Formerly known as Jaisinghpura Palace, the gurudwara was once a bungalow owned by Raja Jai Singh and was later opened as a gurudwara.

The Gurudwara is named after Guru Harkishan Sahib, the eighth Sikh guru. While it is one of the most important places of worship for the Sikh community in India, it is also much more than just a religious monument. It has a great historical, social and cultural significance, having been witnessed and participated in various socio-political instances in the capital.

When you are planning your list of sightseeing places in Delhi, Bangla Sahib should certainly be a priority for the golden domes, cool marble floors and peaceful Sarovar waters which are more gratifying than any marketplace or dine-out experience. Visitors of this holy place are not limited to the Sikh community, and belong to various communities, cultures, nationalities, religions and races.

It also offers varied experiences as apart from the main gurudwara structure, there is also a Sarovar and a langar hall, both symbolising amalgamation of humans, beyond religious and cultural divisions. If you wish to explore art, culture, religion and history of Delhi, then Gurudwara Bangla Sahib should be on your list of places to visit in Delhi. It is an engaging experience for people of all age groups.

The sanctity of the premises is reflected in the maintenance as they are secure, orderly and extremely neat, making it a pleasant visit for travellers. It is also interesting to note that a lot of the functions of the gurudwara maintenance are performed by volunteers and devotees, thus making it a true community space.

People from the deprived sections make their way here to seek food and shelter here. The fact that this place aids the survival of many strengthens its glory.Visit the gurudwara to step into moments of peace and to surrender to the powers of the universe.

In the seventeenth century, Gurudwara Bangla Sahib was known as Jaisinghpura Palace and was owned by Indian ruler Raja Jai Singh of Jaipur who held an influential position in the Mughal Emperor Aurangzeb’s court. The area which is now known as Connaught Place, a popular area for shopping, eating out and events, was then Jaisingh Pura, a culturally rich area.

The story goes that a young Guru Har Krishan, the eighth Sikh Guru, resided in the bungalow when he came to Delhi in 1664. At the same time, there broke out a terrible epidemic of cholera and smallpox which quickly spread across the city.

The Guru helped the poor and diseased by carrying drinking water from the well and it is his kindness and compassion that comforted the hearts of those affected. Unfortunately, he could not be immune to the infection and he too was afflicted by the sickness.

On 30th March, 1664, Guru Har Krishan passed away. Raja Jai Singh later built a tank over the well from where the Guru had carried the water and to this date, the water from the tank is considered to have healing properties. The water is called “amrit” and is believed to cure the ill and is hence carried home by thousands of Sikhs.

The gurudwara itself was built by Sardar Bhagel Singh, a military general. Around the year 1783, he built 8 important Gurudwaras in Delhi and Bangla Sahib is perhaps the most prominent one of them.

While Gurudwara Bangla Sahib is a place of worship and one of the most beautiful monuments of religious significance across the world, it has another timeless aspect which attracts visitors of all religions, castes and communities. While the construction of the place holds multiple intricate details within it, the structure is imposing and grand all at once in the first glance.

The magnificent building is built in a classic Sikh style, with a heavy influence of Mughal and Rajput styles. It is also built in a way that it is suitable and appropriate for the weather conditions of Delhi. Most of the structure is made out of white marble, lending it a calm and soothing vibe. The central golden dome sparkles in the sunlight and without a doubt, it is the most striking feature of the structure.

A tall pole holds atop the Sikh flag which flutters in the wind, an unmissable symbol of Sikhism. It is known as Nishan Sahib and for visitors still far away from the gurudwara, it becomes a sign of arrival. Stop by to look at the walls at the front of the structure and you will be mesmerised by the elaborate carvings that embellish them.

The Sarovar is the second most important structure within the gurudwara complex. A wide open sky and beneath it, the massive water tank with holy waters where devotees take a dip before entering the place of worship.

Things to do at Gurudwara Bangla Sahib

1. The Sarovar is the first spot you should visit. If you have enough time, do carry along an extra set of clothes and take a dip in the sacred waters as they are believed to have healing properties that can cure any skin ailments.

Regardless of the truth of this belief, even dipping your hands in the water can have a soothing effect and you will be able to feel the presence of thousands of other worshippers who have revered the place before you.

The Sarovar also houses several varieties of fish and they swim close to the visitor’s feet, proving how comfortable and secure they feel in the Gurudwara. Remember that the caretakers feed the fish regularly so do not feed them any outside edibles.

2. The inside of the Gurudwara is as captivating as the architectural glory outside and after the darshan, do spend some time sitting inside, listening to the Sikh Gurbani being performed by the musicians.

There are TVs that display translations of the gurbani lyrics but even if you do not indulge into the teachings being sung, the music and the atmosphere itself will transport you to another world for a while.

3. There is langar service happening throughout the day. The langar is the communal meal which is served free of cost and the Gurudwara serves around 180 people every 15 minutes! The entire process of making the food to cleaning the dishes is performed by sevaks, who are volunteers at the Gurudwara.

You will be surprised to see many Hindus volunteering for the langar service. The meal is simple food, usually dal, roti and rice which in itself is its major appeal along with its deliciousness.

4. The Karha Prasad must not be missed and do get some packed for your friends and family. The humble halwa melts into your mouth and is made with plenty of love and ghee!

5. Take a round of the museum and the art gallery which presents various important events in Sikh history. Not only do they illustrate some of the significant instances which have defined the culture of Sikhism, but they also show some interesting objects with fascinating stories behind them.

If you can, talk to some of the administrative staff members who have been at the gurudwara for decades and they will have interesting stories, myths and legends to share with you.

Photography is prohibited inside the gurudwara and you might be reprimanded for it if you do it around the Sarovar, Moreover, the place has such a capacity to enchant you that photographs will be the last thing on your mind.

6. Along with this, there is also a small school inside the premises, a hospital and a library. There is also a Yatri Nivaas and in case you want to extend your stay, you can contact the administration and if there are free rooms, they will accommodate you.

7. Lastly, there are various snacks (Chai-Pakoda) stalls right outside the parking area of the Gurudwara. They serve a variety of delicious fried delights made using onion, spinach, cauliflower, potatoes and is served with green chutney.

One of the other popular fried delights being served here are the Ram Ladoos. All of them are fried right in front of you so it ensures they are piping hot. If you have a sweet tooth, they often sell Jalebi as well. The best part about these stalls is that they are available round the clock and are very cheap.

The Gurudwara is open 24 hours on all days of the year.

You can spend up to an hour and a half in the Gurudwara in exploring it completely.

Some important tips and information for visitors

A marvel of astronomical invention built as a sundial, the Jantar Mantar is located only a kilometre away from Gurudwara Bangla Sahib. It is one of the five sites built by Maharaja Jai Singh II of Jaipur and will be a pleasure to visit for anyone interested in astronomy, physics or scientific inventions.

The inner circle of Connaught Place is less than 2 kilometres away and alongside your visit to Bangla Sahib, you can have lunch at one of the many famous restaurants at Connaught Place. If you’re in for a bit of shopping, do make your way to Janpath for ethnic wear and handicrafts.

Birla Temple of Delhi, also known as Laxminarayan Temple, is dedicated to the Hindu Lord Vishnu and Goddess Laxmi. It is another example of architectural excellence in a unique way as the materials used to construct it are quite modern. If you manage to go here in the evening, the aarti and bhajans will surely capture your heart!

The President House is one of the most illustrious locations in Delhi and stands as a landmark of Indian democracy and the political system. It is best to visit it if you can hire a taxi in Delhi as you will be able to drive up to the main gates and have a look inside the grounds.

If you hire a taxi in Delhi, you can cover India Gate along with Rashtrapati Bhawan. It is one of the liveliest places at all times of the day but evenings are when families come here to have picnics, enjoy a game of cricket and snack on the tempting street food stalls.

How to Reach Gurudwara Bangla Sahib

By Road- The gurudwara is located near Connaught Place and being in Central Delhi, it can be conveniently reached through public transport or private vehicles.

Alternatively, you can also book a private cab from top car rental companies in Delhi for commuting within the city in a hassle free manner.

The best monuments are not the ones preserved well physically but the ones which are living, continuing to serve the people. The Gurudwara is an example of a living monument, preserving its rich religious heritage and yet continuing to build a legacy that will last centuries.

The city of Delhi is one that will welcome you with open arms and open hearts and yet it can be daunting at times with the constant buzz. In those times, it is a place like Bangla Sahib which retains the peace of the old city and shares its warmth with everyone who stops by.

To explore the various attractions of Delhi, choose one of the various all-inclusive Delhi Tour packages offered by Delhi Tourism, a division of Holidays DNA. With affordable prices and excellent services offered by us, you are sure to have a great time in Delhi. Do fill the Contact Us form and we will get back to you at the earliest.

Places to Visit in Mysore