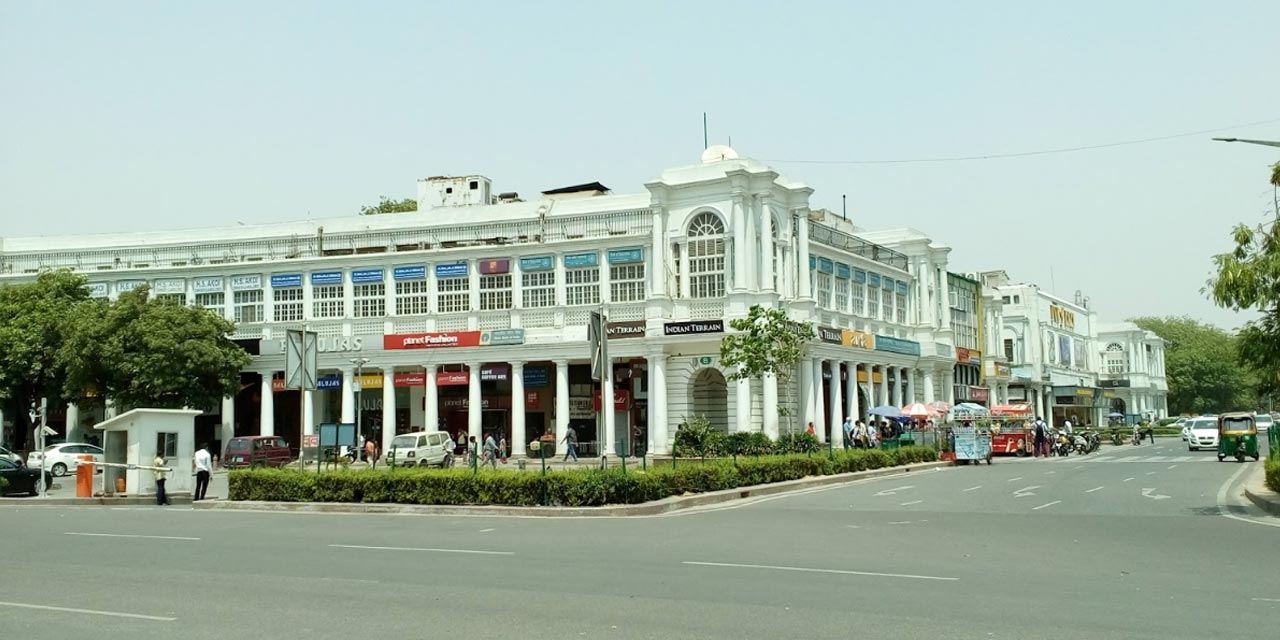 CP was named after Prince Arthur, 1st Duke of Connaught and Strathearn and developed as a showpiece of Lutyens’ Delhi. The construction work of the commercial marketplace began in the year 1929 and was completed by 1933.

On the one hand, CP houses some of the most significant commercial entities and relevant government offices, on the other, it is a shopping hub with some of the most prominent brands in the country and the world.

Looking at how Connaught Place has flourished in the recent years, it would be difficult to believe that before becoming CP, the place was a ridge. The entire area was covered by Kikar trees and was populated by Jackals and Pigs. People from other parts of the city like Civil Lines and Kashmere gate used to visit the place for partridge hunting.

There was hanuman temple that attracted a lot of visitors. But the people used to come in groups only on Tuesdays and Saturdays and used to return before the sunset to avoid any mishap. After the plan of constructing Connaught Place came into existence, people from the nearby villages of Jaisingh Pura, Madhoganj, and Raja ka Bazaar were asked to clear the area for the development of CP and its adjacent areas.

The displaced people were relocated at Karol Bagh, which was a rocky area with wild bushes and trees. Everything was demolished except three structures including The Hanuman temple, the Jain Temple in Jaisinghpura and the Jantar Mantar.

The British were very serious about a commercial marketplace in Imperial India. CP was envisaged as the central business district and was constructed under the leadership of WH Nicholls, the chief architect of the project.

However, Nicholls left the project in between, and Robert Tor Russell took over the construction of the central plaza, that was based on European Renaissance, to be made in classical style. Russell was the chief architect of Public Works Department, India.

The architects had ideated to have commercial buildings on the lower floor and a residential complex on the top floor. And CP eventually took the shape of a complete circle. It comprises of two concentric circles, with outer circle, middle circle, and inner circle. Seven roads radiate from the park at the center. The original plan stated that the top of all the blocks had to be joined. However, to render scale to the place, the circle was broken up.

In fact, the location was so prime that the government had proposed setting up of New Delhi Railway station in the circle. However, the idea appeared to be impractical; hence a land in a close by area in Paharganj was chosen for this, and the New Delhi Railway Station was constructed there.

Initially, Connaught Place was occupied mainly by the traders of the Kashmere gate, with some of the major names like Galgotia, Kanter’s and Snowhite. Since most of the rulers of Indian princely states had their residences close by, there were shops for designer clothes, pianos, shoes, and artifacts that were being set up.

One of the major attractions of those times was Regal Cinema. It was the first cinema of Connaught Place, and it hosted some of the most famous ballet performances, music concerts, theatre groups, et al. The Odeon Cinema and Rivoli were set up later in 1938. Only Indian snacks were available initially. However, a whole of restaurants was open in the Plaza with names like Kwality and United Coffee House venturing into the market.

It wasn’t the market that was more important. It was a culture that Connaught Place was bringing in, that was more impactful. Wenger’s which is popular even today was the first confectionary shop in Connaught Place. Davico’s and the Standard Restaurant remained popular for decades, and people used to queue out of these places for food.

Connaught Place got its first luxury hotel with The Imperial on Janpath (known as the Queen’s way then). The hotel became the ultimate haunt for the high-flown business meetings and royalty. It is worth mentioning that Jawaharlal Nehru, Mohandas K. Gandhi, Muhammad Ali Jinnah and Lord Mountbatten met to discuss the Partition of India and the birth of Pakistan took place at The Imperial hotel in Connaught Place.

CP witnessed a dwindling business during the Independence movement and World War II. But things came on the track, and in fact started growing, in the 1950s. Today, Connaught Place has become one of the most expensive places in the world and houses almost all global brands.

Inside the Connaught Place:

Connaught Place was all about cinemas till the stalls, bazaars, and restaurants did not mushroom in country’s most premium market. Everything from Bollywood, Hollywood, Russian ballet, Urdu plays, and silent films were shown on the screens of some of the most vintage cinema halls.CP was an elite place, and only the Royals could enjoy the luxury of cinemas like Rivoli, Regal, and Odeon.

This temple has been an essential part of Delhi’s religious side. It is believed that the temple was one of the four important sites that were a part of the mythological Mahabharata. The temple also features in Guinness Book of World Records as the worshippers had chanted “Shri Ram Jai Ram Jai Ram” in the temple for 24 hours at a stretch.

This historical monument has now become more of a protest point (dharna sthal), but it has its importance intact in the Indian history. Jantar Mantar has a rather interesting story to its construction. Maharaja Jaisingh II of Jaipur was quite interested in keeping track of dates and calendars.

But in those times, it was possible only by watching the movement of sun and moon. He wasn’t too happy with the small tools being used for the process. Hence, he created large astronomical instruments for the measurement in five sites. The Jantar Mantar is one of the 13 astronomical tools that tell accurate time and date. This site in Connaught Place gives a broad sense of India’s scientific prowess and also helps in marking critical celestial movements.

Amidst the neverending hustle-bustle of Connaught Place, lies a place full of serenity and calm. Gurudwara Bangla Sahib is although a place of religious importance, it has its historic charm too. The golden dome of Gurudwara radiates the Sun rays and makes the site look divine.

Although it is a house of worship for followers of Sikhism faith, people of all religions visit Gurudwara Bangla Sahiba and pray. The enchanting folk music of the place, its beautiful decor, and embellished architecture are sure to cast a spell on you. So, the next time you want to have a peaceful time with yourself and the almighty, do visit Gurudwara Bangla Sahib in Connaught Place.

Welcome to India’s oldest toy shop! Although Connaught Place has undergone tremendous changes over the years, one thing that remains stable in the marketplace is the toy shop of Ram Chander & Sons. The shop was built in the 1930s and has been renovated several times ever since. Although the place has witnessed renovation several times, the vintage feel of the toy shop is still alive.

Amidst the high-flown buildings of the Connaught Place, stands Agrasen Ki Baoli. This place holds essential heritage value and is preserved by Archaeological Survey of India. Agrasen Ki Baoli was built in the 14th century by Kind Agrasen with the aim of providing a constant supply of water in the city. It also served as a resting place for traders and travelers of the city. There are some stories that speak about Agrasen Ki Baoli being haunted by ghosts. However, nothing concrete in this regard has been noticed ever.

If you have an eye and a sense of appreciation for art, Dhoomimal Art Centre in Delhi will be a home away from home for you. The art center was founded by Shri Ram babu Jain in 1930s and is India’s oldest gallery showcasing contemporary art. The place was established with the view of highlighting the importance of art and provide the right platform to the modern artists.

The contemporary artwork showcased in the gallery gives a fantastic display of India’s modern culture. Besides, there are also musical evenings that add to the soulful experience. Artists from around the town flock to this place for appreciating each other’s work and networking.

The very famous Nizam’s Kathi Kebab serve amazing Mutton Seekh Kebab and Egg Roll, and Railway Mutton Curry. Zen, in B Block, showcases traditional Asian culinary traditions. You get to try everything from Malaysian curries to Schezwan fare in this restaurant.

How to reach Connaught Place:

Auto Rickshaw/Cab: Delhi has a very well connected network of taxis, cabs and auto rickshaws. You can catch them on roads or can book them via apps like Ola, Uber or Jugnoo.